skip to main | skip to sidebar

The return of Gama and other yarns that made the website 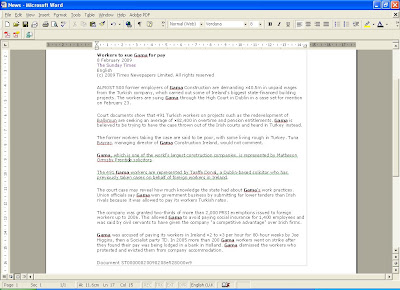 There is no doubt that finding the Irish edition of the Sunday Times online is a bit of a struggle. It's http://www.timesonline.co.uk/tol/news/world/ireland/ by the way. It doesn't really roll off the tongue. We are looking to get a simple timesonline.ie address but I don't know if that will happen any time soon.
One yarn from last week that didn't go up on the site was about Gama. Remember them? Well hundreds of Turkish workers haven't forgotten their time in Ireland and are suing for unpaid wages amounting to over 40m euro. Click above if you want to see the story about the case which will be in court in a few weeks.
We are always told that we need to have a mix of "lighter" stories in the paper. It can be more challenging finding a light story that is interesting than a serious one sometimes. So a trip to the cinema last week unearthed one of these less serious stories in Liffey Valley. Vue now have screenings of films for "adults only" despite the film being classified 12A or 15A. Personally I've never had a problem with kids in cinemas. I've seen a lot of drunk or rude adults chatting through films though. I don't like the extra 1.5o euro charge either.
Last week's biggest story was the pension levy. In the Sunday Times we've written several stories highlighting how the public sector pay has left the private sector far behind in the last decade. The amount of the state's finances going on public sector pay grew to €18.8 billion for 2008. An ever increasing amount of this was going to pay the "unfunded" public sector pensions so it was inevitable the government would make changes in this area with the economy going down the tubes.
The knock on effect of the pension levy is going to be huge and may involve a lot of industrial action. We wrote that up to a 1,000 gardai may retire this year because, well, it makes sense to a lot of them to get a pension of half their pay and go look for some other work rather than see a huge chunk of their wages disappear from March.
One other garda related story from last week is about a personal injury claim garda Damien Green is taking. That is just one incredibly sad story.
Posted by Mark Tighe at 1:08 AM

Mark Tighe
Dublin, Ireland
I am a news reporter with the Sunday Times in Ireland. I mainly cover legal affairs but anything that is interesting, quirky and newsworthy is likely to grab my attention. If you'd like to contact me about a story you can email me at mark.tighe "at" sunday-times.ie. My office number is 01 4792449. No press releases wanted!

This blog is a personal blog of Mark Tighe. Any views expressed here are not the official view of the Sunday Times (Ireland).